I’m always heartened to see pedantics give way to pragmatics when it comes to punctuation. This, recently, on the Oxford comma:

I’m starting to see Oxford commas in my sleep. In related territory, I recently came across:

1tsp of sherry, or balsamic vinegar

Well, it’s unambiguous. Wrong, admittedly, but you can’t have everything…

‘He was accompanied by a Hungarian, a nice chap, and a painter’

How many companions did ‘he’ have? One, two, or three? 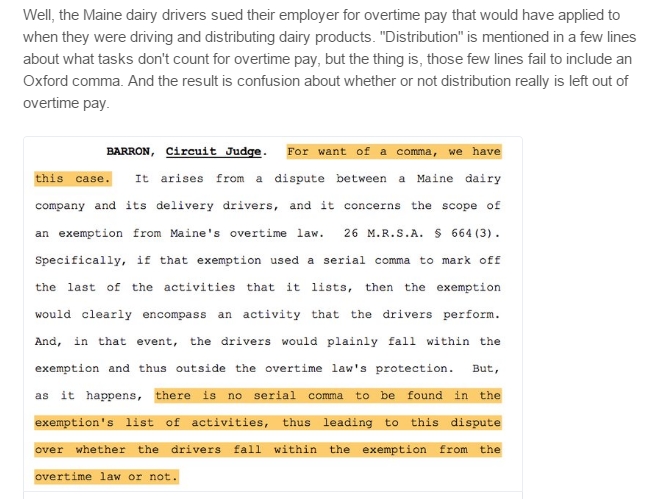 As the piece summarizes:

Exemption F….lists which work activities do not count for overtime pay:

Meat and fish product; and

So there you have it: take care with your Ps & Qs…and your Oxford commas.

(For the full story: http://www.stumbleupon.com/su/1RUpCT/:UJ9FVGDH:EuAl@Q+V/mashable.com/2017/03/15/oxford-comma-changes-court-case)

Editing some copy written in American recently, I grumbled to myself about all the Oxford commas – the ones like those in the subject line, that appear entirely redundantly in sentences involving lists. As though ‘Apples, pears and bananas’ is somehow wrong. It’s all a hangover from a pompous and smug notion of the language that allows the supposedly educated to sneer at their supposed educational inferiors, and I loath it.

Then what should turn up in my inbox but this, from a friend: 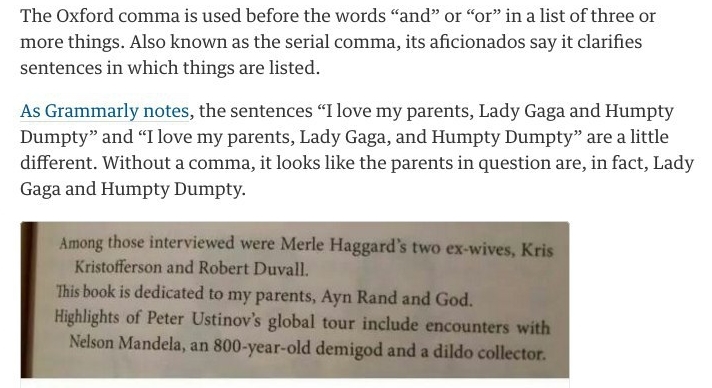 Illustrating, amusingly, that while often redundant, and certainly not to be used invariably, the OC has its place.

When I feel the need for a bit of R&R, I sometimes pop over to the BBC Messageboards to see if there’s an opportunity to goad the Daily Mail sanctimoniati who tend to hang out there. Been having fun over the last day or two with a thread grammatical.

There are some who say you should not use a comma before ‘and’ : for example in the phrase “Tom, Dick and Harry”.

Yes, that’s my rule as well. Similarly, not starting a sentence with “and” or “but” which are links between words or phrases, thus negating the need for a full-stop. (Except where “but” is not used as a link ….. “But for the airbag, he would have been badly injured” etc. )

I beg to differ:

Some Americans use a comma in Tom, Dick and Harry, for reasons only they could understand, but no true born Englishman ever would. As for the idea that there’s anything wrong with starting a sentence with ‘and’ or ‘but’, it’s a piece of archaic nonsense, fast going the same way as the absurd prohibition on splitting infinitives.In truth, there’s no reason not to begin a sentence with a conjunction. People do all the time – in speech as well as in written English. And why not?

I’m a true-born Englishman, and I use a comma for “Tom, Dick, and Harry”, because otherwise the last two items of the list appear to be more strongly linked than the others, and that is not the intention here.Why is this important? Because it’s relatively common to embed a list within another list. If you mess up the commas, you have no idea of who is linked within one of these embedded lists, and who isn’t. For example:”Let’s check who’s coming on the coach trip: Jack, Rob, Bill and Diane, Fred, George, Will and Kate, and Hugh and Jenny.”If you habitually omit the comma between the last two items of a list, you’ll have no idea whether Hugh and Jenny are an item. But if you are scrupulous about where you place commas in lists, you’ll know immediately who on this sample list are couples and who aren’t.In other words, correct and logical use of commas in a list preserves the relationships of the list-members.

But we come to the rescue of common sense, armed only with a fruit bowl.

Interesting. And well-argued. Your example list is nearly persuasive. But not quite!

I’d also use commas carefully in such a long list, to clarify relationships. But I’d question your suggestion that what’s true for long, complex lists must therefore dictate what you ‘habitually’ do for short ones, as well as your “otherwise the last two items of the list appear to be more strongly linked than the others”.

Needless to say, battle rages on.